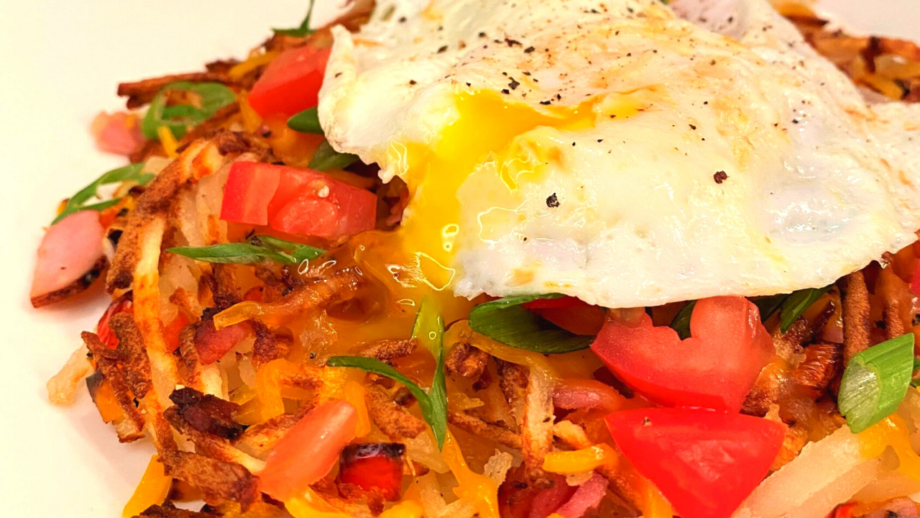 The Simply Potatoes refrigerated hash browns were the first up for experimentation. One of the first things I noticed was that the middle of the air fryer cooks more slowly.

The trick to air fry hash browns with max crispiness is to loosely pile the potato mixture against the walls of the air fryer as best as you can. By distributing the hash brown mixture so as many potatoes touch the metal walls as possible, you will get crispy air fryer hash browns in a matter of minutes!

I was skeptical using frozen hash browns in the air fryer. I expected them to be much soggier compared to the refrigerated shredded hash browns.

To my surprise, they turned out fantastic and were my favorite of the three variations simply due to convenience. The only necessity for this recipe is adding an extra minute or two to the cooking time which is outlined in the recipe below.

Rather than using prepared sweet potatoes, I made my own shredded sweet potato hash browns. Simply peel and grate a raw sweet potato. If you choose to shred your own, it adds a bit more prep time and clean up.

One sweet potato yields about 1 to 1 1/2 cups shredded sweet potato. I used two sweet potatoes instead of the prepackaged shredded hash browns. This recipe variation had a slight sweetness which I really enjoyed.

How many calories in hash browns?

Compared to fast food or restaurant hash browns, this recipe is much more nutritious and could stand alone as a complete meal unlike a majority of the sides listed below.

To give you an idea of how many calories are in hash browns, the nutrition for several varieties of fast food and restaurant chains are listed below:

Oil is used to either deep fry or cook the shredded potatoes on a flattop grill. Fat from the oil helps achieve the highly desired crispy texture. Once prepared, about 50% of hash brown’s calories are derived from fat.

Protein is found sparingly, about 2-3 grams per serving, unless the hash browns are topped with breakfast meat(s) or cheese. To amp up the protein in this recipe, the hash browns include ham, cheese, and the option to top with a fried egg (or two) which I highly recommend! I mean look at that yokey goodness! 🙂

Bottom line: Potatoes, both white and sweet potatoes, fit into a well balanced, healthy diet, so choose whichever you prefer!

Some of the aforementioned fast food hash browns include additives that aren’t always allergen friendly. McDonald’s, for instance, adds beef flavor to their hash browns which includes wheat and milk derivatives.

This recipe – whichever way you choose to prepare it – is gluten-free. Be sure to review the ingredient label for the ham and potatoes if you use a brand other than those pictured above.

This gluten-free hash browns recipe does include cheese. To make it dairy-free, simply omit the cheese, and you are good to go!

^Indicates affiliate links. When you make a purchase through any of the links, there is no additional cost to you, and I may make a small {and very appreciated} commission. Thank you for your support! 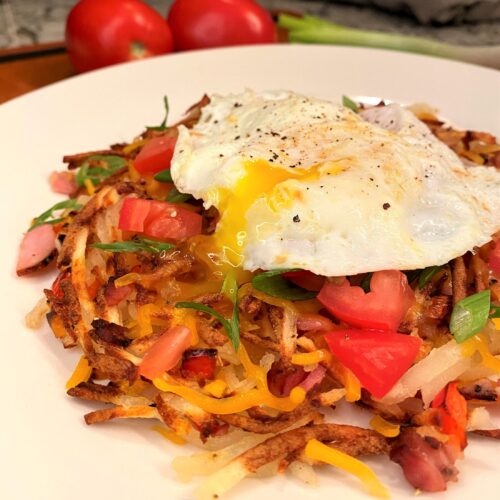